Okay, SPIKE has been doing this thing called Star Wars Sundays for 2 weeks now. Last week was New Hope, this week was Empire Strikes Back (which is on right now)...and I just thought of something I'd not thought before.

Luke gets stuck outside, Han goes to rescue him. It's freezing outside and the temp is fading further down all the time. The TaunTaun (a species the Rebel Alliance no doubt found there) that Han rides out on dies from exposure. Han hauls Luke up to its guts, man doesn't have the skills but he manages a lightsabre okay, and keeps them both warm with that...

...but Luke had been out there for hours and doing pretty crappy already.

How did he survive out there when something adapted to that climate could not? 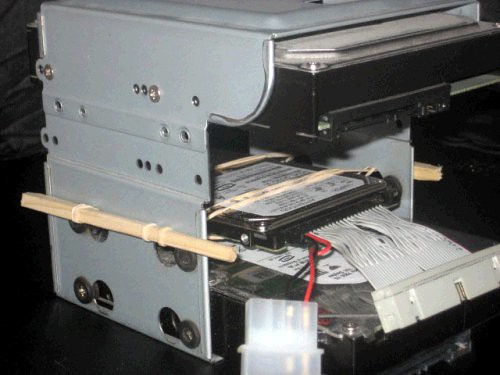 Couldn't sleep the other night and was between womanizing and drinking. I'd been meaning to set up RAID 5 on my media center to house about 1.5 terabytes of space spanning of a bunch of disks so, I rolled up my sleeves and went to work.

Decided I needed a really small disk for a barebones XP config as all it had to do was run Windows MCE. 20 gigs was plenty and I had a spare 2.5" laptop drive that fit the bill.

But how to mount that sucker?

As it turns out, Maximum PC had just the trick a while back and I had exactly four rubber bands and ONE chopstick, that was the perfect size when snapped in half.

After only 30 mins, was able to mount it.

As for the RAID 5, well, that sucked hard; essentially JOBD that I concatenated for now but it's on my to-do list.

Back to the rum. 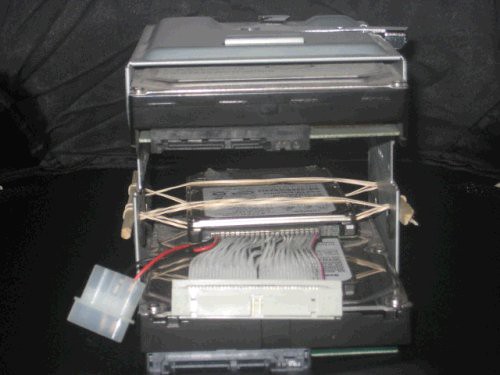